AUB students rise up for their rights 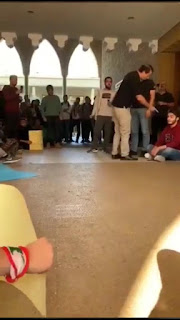 There's a new video circulating about an incident that happened with AUB students yesterday, they were actually asking to be billed in Lebanese Liras considering how fluctuating the Dollar is (USJ and Universite Antonine are already doing that). As you can see in the video an AUB offcial is denigrating students because of that- as the video continues, the students rise and agglomerate around the official as they chant their slogans.
Now here's the catch. Fadlo Khuri as I wrote earlier, president of AUB tried to become the mouthpiece of the revolution taking place in Beirut (he was eviscerated on twitter!), but wait - wasn't he all for this dissent and tried to "hear" what the manifestants had to say (and spoke to them in English no less!). Apparently one only listens to manifestants when outside the university campus. Interesingly, Khuri insisted to be paid in Dollars with the top brass whereas other AUB staff get paid in Lebanese Lira. How cool is that?
As I said earlier, I am an AUB alumni - these kids are being as the AUB anthem says "true and brave".
And I like it!
Posted by Tarek Chemaly at 8:52 AM