All brands are riding the Coronavirus wave, now what? 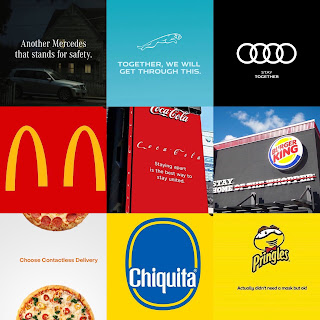 Well, celebrities are doing boring workouts online, brands are milking this Coronavirus to the last drop, directly or indirectly, officially or through fans (the above composite has the work of designer Ashif Mohammed for Pringles among agency-led work for other brands). OK, now what? All brands are claiming #stayhome and preaching #socialdistancing - some are putting their money where their mouth is: Armani donated 1.25 Million Euros, Prada started with donating six intensive care units and is now manufacturing masks and overalls for the medical staff, Zara is doing the same in Spain, LVMH turned its perfume division to produce and give away sanitizers, and so on and so forth... But make no mistake, take away the fanfare - some of it real, some of it marketing, everyone is asking "now what?" and "where do we go from here?".
How will governments balance the difficult act of maintaining the health of people, to the economy at large. Already in the US there is fidgeting about the shut down, whereas Denmark is promising to pay 75% of employee salaries in the private sector as long as companies do not lay off their employees. But naturally, all this is an abstract equation.
In Lebanon, you need to add our monetary crisis, our capital controls, a devastating storm, social and political unrest, and the equation is honestly overwhelming. But this brings us to the same question "how long will this persist?" - a maddening question as thankfully, Lebanese seem to be taking this seriously despite a few corny aberrations.
Interestingly, the further this goes, the more people and societies reveal what they are made of. Hey even the Young man who originally said "If I get Corona, I get Corona, at the end of the day I am not going to let it stop me from partying" has issued an apology (his name is Brady Sluder and you can read his apology - which to me reeks as a statement by a PR company - here) at the same time Texas Lt. Gov Dan Patrick said that grandparents are willing to die to save economy for their grandchildren.
My readers are now confused, am I talking about Lebanon where I am based or about the world at large? Psssst, it does not matter anymore. A Chinese company donated tens of thousands of masks to Italy and on the boxes it wrote "We are waves of the same sea, leaves of the same tree, flowers of the same garden" which is a quote from Italian philosopher Seneca.
Indeed, we are.
Posted by Tarek Chemaly at 9:10 AM