Women in Lebanon and the stereotypical stance regarding faith 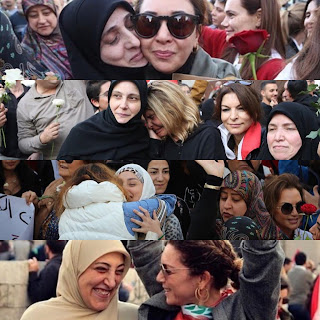 Recently, as part of the side events accompanying the "revolution" in Lebanon, there has been many meetings where women of previously opposing camps (Chiyah - Ain el Roumaneh, Khanda2 el ghamik - Tabaris) went out to proclaim that they will not allow parties/leaders to drag them or their sons against one another in a civil conflict as they did in the past (specifically the 1975-90 war). Whereas I cannot but encourage these acts - especially as someone who comes from a family where those issues were non-existent - I cannot but be a bit shocked at the stereotypical attitude of it all.
Just look at the images: All Moslem women wear "islamically compliant" veils, all Christian women have designer sunglasses and are coiffed trendily. I am not here to deny the emotions expressed in those images (good on them!) but these images imply all women subscribing to any faith are all alike which is incredibly far from the truth. Variations are all over the place, a lot of Moslem women are not veiled, and certainly not all Christian women are the BCBG sample shown in the images.
It baffles me. For a revolution that wants to get past faith/sect issues, no matter where I turn, I see them emphasized as if saying "we want a united Lebanon in spite of our different faith" as opposed to "regardless if we believe or what we believe in".
This attitude doesn't work in the long run, truth be told, as long as one is emphasizing faith as a driving force - specifically in this stereotypical way.

Posted by Tarek Chemaly at 9:37 AM