The "small" request of the manifestants in Lebanon 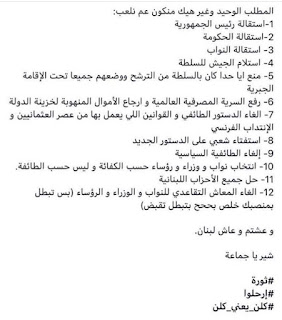 So I read this somewhere on the ether. Who did this specifically I know not. But it comes apparently from the "manifestants" in the streets of  Lebanon. Here's a small translation about their demands:
"One request and otherwise this is not a game:
Resignation of the president
Resignation of the government
Resignation of the members of the parliament
The army taking reign of the power
Forbidding anyone in the currently elected from seeking reelection and putting everyone under house arrest
Removing international banking secrecy and getting back all the stolen money to the state
Removing electoral laws which date bate to the Ottoman and French mendate periods
A new poll on a new constitution
Dissolution of all Lebanese parties
Stopping the pension of all members of the parliament, ministers and presidents (when you stop serving you stop earning).
Long may you live and long may Lebanon live"

It took us forever to elect a president, ditto to form a government, the electoral law which got the current parliament takes a math genius to understand (I talked to a math genius at the time and he barely understood it).
So the army taking power? Hmmmm, it happened before to results which were not fabulous (interestingly, someone asked me in a private conversation when I raised the point, "who else do you suggest?"). OK so you want to forbid anyone in power from getting reelected - maybe you should check this piece as a reference....
House arrest? Sweetie, all of them own multiple villas, there are no "house" here.
Removing international banking secrecy? Hello, Geneva? Wrong number!
A new poll on the constitution as written by? Whom? We just let all the goons out of the power, remember? Please do not say "technocrat".
Dissolution of all Lebanese parties. OK, I shall let this one slide. It is too humourous.
Now whereas I am not against pensions being stopped, I remember when President Emile Lahoud wanted the ministers and MPs to put one month salary to support the economy - Issam Fares the vice-Prime Minister objected on the grounds that his salary was pre-booked to help people in his native Akkar region and that doing so would interfere with his pre-made plans. The man naturally had a lot of money elsewhere but he was making a major point as to who "owns" his money/salary and who is allowed to toy with it.
Long may you live and long may Lebanon live - I got nothing against this.
Posted by Tarek Chemaly at 12:19 PM