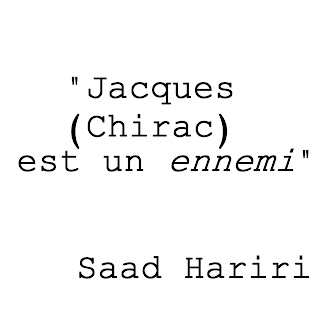 The tight relationship between the Hariris and the Chiracs is only too well documented - when Jacques Chirac decided to retire from the public eye he did so in the Hariri-owned villa opposite the Versailles palace. And when Rafic Hariri was slain in 2005, Jacques Chirac (who passed away today), made a fast visit to Beirut. It was supposed to be an incredible mediatic coup - a French president comes immediately comes to Lebanon to offer condolences for a deceased Lebanese Prime Minister, a feat unheard of before.
Saad Hariri, our current prime minster was at the airport to greet him - Future Television (now defunkt) made a sensation and interviewed him right there at the airport - only for the PM to utter the blunder of all blunders! "Jacques (Chirac) est un ennemi" (Jacques (Chirac) is an ennemi) he said instead of "ami" (friend). Obviously his French language was not too developed because he said it with his trademark smile.
The video was immediately burried after some broadcasts (seems French language was not the forte of the station).
As Jacques Chirac (with whom I was not on first name basis like our prime minister) dies today I cannot but recall this annecdote.
Posted by Tarek Chemaly at 5:20 PM