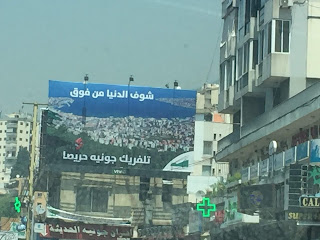 Teleferique (or cable car) is a highly enjoyable, panoramic, and yes - romantic, trip between Jounieh and Harissa (Our Lady of Lebanon). But this is an institution that rarely, if ever adertises. Does it need to? I know not. Up to my memory, only did I see an ad for it.
In an episode that happened a long time ago, a couple was riding one of their cable cars when the power broke down, normaly emergency generators take over but these failed. The couple stayed above the highway several hours, and the girl was given a pseudonym in the news Chadia Harissa. One person who was close to the situation told me, "if this institution was on better terms with journalists and media, they would have covered this under a better light". Which brings us to - an ad for the teleferique - funnily right next to the highway exit that leads to it (which makes me wonder, does anyone spontanuously say, "oh let us take a ride and go up the mountain by cable car?") but still, it is such a rarity that it is worth reporting.
"See the world from above" - it could be interpreted as "look down on the world" but that would make it a bit snobbish which I doubt is the purpose.
Still, an ad for the teleferique! Yay!
And before I go - enjoy this image from 2011: 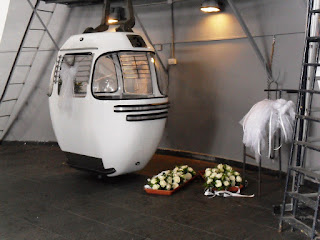 That beats any wedding limousine!
Posted by Tarek Chemaly at 8:28 AM