It is Easter time so it is Golden Plate time! 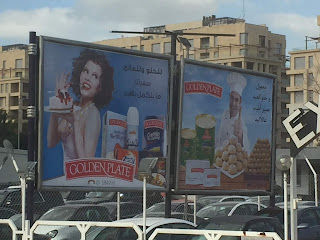 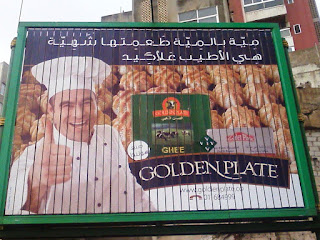 Golden Plate was Al Baqara Al Haloub
It was launched as "different shape" but "the taste still exists" (which means it was a rebranding), and then - in 2013- they said "different name" "but quality still exists". Apparently, everyone, like me was still confused. And so it was only for this year that they made the most obvious hint to what it was "miyye bil miyye ta3metha chahiyye"... (مية باليمة طعمتها شهية) which is none other than a slight deformation of the famous radio jingle of "Al baqara al haloub" (the milking cow - مية باليمة سمنة نقية طعمتها شهية سمنة البقرة الحلوب) the original name of this ghee which is being advertised!
As a transition and rebranding it is a fiasco because no one knew the original, and so I am sure no one bought it under a different name not knowing what it used to be. For those of you wondering why on earth someone is advertising ghee - it's because it is an essential ingredient for "maamoul" the ubiquitous Easter cookie which a lot of people still do at home.

Which brings us to today:
Easter again, Golden Plate again, maamoul again. Except this time there is a variant of salty food ad as well. No matter it is not Easter without a Golden Plate ad.
Posted by Tarek Chemaly at 8:04 AM