Thomas Kolster - Mr Goodvertising - will be in Beirut! 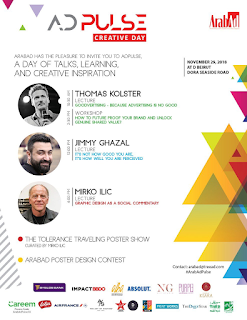 Thomas Kolster, Mr Goodvertising himself, will be in town. I have had the pleasure of talking to him during the round table talk that was held in Amsterdam on the side of the Epica Awards where I was a jury. The inverview was published in ArabAd which will be hosting Kolster for a special event among other speakers. Please check the poster above for details.
Below is the part of the article where Kolster is involved:
"Opening the show was Danish author Thomas Kolster, from the “GOODvertising” book fame, who went through examples upon examples of brands, which truly tried to do good in their communities and the way they set about doing it. In a private chat with ArabAd, Kolster – when asked about the limit of CSR (Corporate Social Responsibility) and the beginning of goodvertising – said that “CSR is what companies need to do, whereas doing good is what they want to do to solve a problem”. But when confronted with an opportunistic side to brands, Kolster gave the example of American Express, which is the founding partner of Small Business Saturday – a manifestation that supports small businesses in the United States – which “did not come up with this event out of nowhere, actually ever since the seventies American Express was involved in its community so much and it was donating a cent from every transaction that used American Express cards for the rehabilitation of the Statue of Liberty in the United States”. Another example Kolster volunteered was the Nike Flyknit, which actually required much less sewing, assembly and eventually raw materials – which produced much less waste – when compared to regular sneaker production.
Kolster started out in “traditional advertising”, his ”major turning point was the COP15 – the environment conference which took place in Copenhagen at the time” – he adds that “naively, I truly believed we could get a solution to world issues from that conference, but if anything, it was the jumpstart for me to think about the issues surrounding me. An ad I remember from the time was for a car brand, which said “we bring our cars by train” and it was that brand’s contribution to solving the issue”.
Asked about whether the altruistic vision came from the fact that Denmark was a society in which the government would provide too much to the population – including cell phones for example – Kolster says that “it literally differs from one society to the other. In certain countries, multinationals are rebuked if they interfere in people’s lives, whereas in other countries the government is so overwhelmed it is the duty of companies to interfere to cover the lag. Unilever is a prime example of companies really trying to do good around them, they have a vision of where they want to be in people’s lives.”
But do his projects have tangible effects on the ground? ”I have done projects in Mozambique, one hairdresser had one bucket of water for all their clients of that day. In some nations saving and recycling are part of the DNA of the population, and it is up to us to take them on that journey further,” concludes Kolster."
Posted by Tarek Chemaly at 10:17 AM