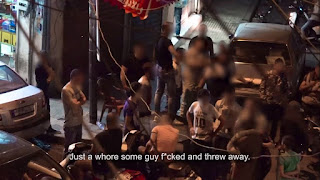 Abaad portrays how people react to rape. And it does so in the most explicit, brash, cruel, smart, authentic way. First see the video here.
What is interesting is that we see the girl (an actress) playing the role of the raped girl. People are both sympathetic and condemining. They wish to help but are restrained by moral judgements, they see the human but refuse to compare her to their own sister, the make value judgements based on clothes and appearance yet without knowing any of the backgrond or character.
All faces were blurred except for the girl who - bravely - agreed to the role (if I say bravely it is because I know an actress who was offered such a role who could have catapulted her to the public eye but refused it based on moral and judgemental grounds).
A true experiment from today's Lebanon.
#shameonwho indeed!
Posted by Tarek Chemaly at 9:46 AM