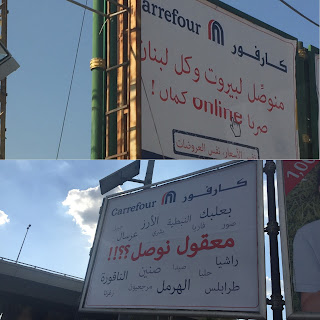 I have given this example multiple times on the blog so far, and I will say it again - when Nike wanted to launch the Air Zoom system during the 1996 Atlanta Olympic games, they ran a multiple pages ad which when folded in the middle said: "tell us what it is, tell us what it does and don't play the national anthem while you do it".
So yes with so many ads going for fanfare left and right, when advertisers outright steal and dress it up as creativity, when there's stale idiotic campaigns running rampant in the market, it is refreshing to see an ad that tells "us what is is" tells us "what it does" and doesn't play the national anthem while it does it.
Now let me outright say - the layout is a fiasco, the typography is appalling, the ad did not deserve a teaser and a revealer (the teaser asked "can we get to (such and such place)?" and the revealer answered "we deliver to Beirut and all of Lebanon" - with deliver and get to very close in terms of writing).
So how come with such a failing ad, am I so impressed? Maybe because I am sick and tired of hearing the "national anthem" while they do it - this below level "creativity" coming from uncultured people.
Carrefour delivers, thank you very much. End of the story.
Posted by Tarek Chemaly at 8:57 AM