Free Patriotic Movement goes with a generic, bland, flavorless campaign for the eclections 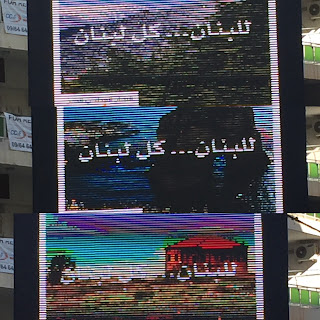 Where do I begin with this disaster? Newsflash for the FPM (Free Patriotic Movement or simply "tayyar"), once elected in the Lebanese parliament and regardless who elected you, you are supposed to serve the interests of all Lebanese citizens. Which is why this campaign, "for Lebanon, all of Lebanon" (on backdrops of generic Lebanese touristic sites) basically says nothing, plays on emotional blackmail, and makes a promise that is actually an inherent right to every voter (regardless who that voter votes for).
Seriously, looking at this campaign, I see a movement which lacks mission and vision, and which promises the Lebanese electorate something that is taken for granted as opposed to achieved via election. I do hope the FPM will either withdraw or rethink this campaign, because as is, it's fiasco!
The definition of a public good is that is "non rival" (the amount used by one person does not diminish the amount used by another) and "non excludable" (one cannot forbid others from using it) - for me, democracy falls under such a definition. Every Lebanese has the right to it FPM, so quit bragging about nothing!
Posted by Tarek Chemaly at 8:21 AM