Abaad and Kafa - on the dangers of over-exposure 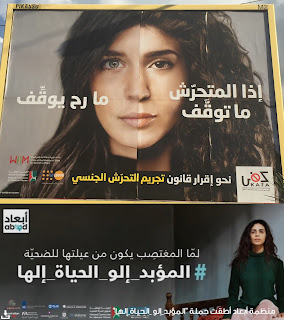 Before elaborating on this post - I have to say I am as feminist as they come. Not just that, any race, gender or minority being attacked immediately enrages me as an act. And yes, I am aware that women's issues happen in all families no matter the socioeconomic background - when, a few years back, several women were killed by their partners, my own second degree cousin was one of them. No one is immune.
So how does one write such a post without opening the floodgates of incomprehension? Whereas I applaud organizations such as Kafa and Abaad and the work they do on the ground, I am a little bit skeptical as to their media strategy.
Morrissey once said about the hit song "Do They Know It's Chrstimas Time?" - "One can have great concern for the people of Ethiopia, but it's another thing to inflict daily torture on the people of Great Britain". Unfortunately, Abaad and Kafa are bordering on that territory.
Yes, violence against women, harassment, incest-rape know no season or no festivities. But having two campaigns about such acts only a week away from Christmas is a bit too much. Lebanon is currently undergoing economical, political, religious, and sectarian pressures at a time the whole atmosphere of the country is glum. Christmas is already being celebrated in a major issue of have and have-nots, with many people ranking in the latter category. Many shops are already holding pre-holiday sales to entice shoppers to part with their money. The weather, still very clement at this stage, is a mixed blessing. On the one hand we need the rain, on the other flooding would be catastrophic for the many homeless (be they Lebanese or Syrians) who are on the streets.
If I am describing this setting, it is necessarily because - and again how do I say that without appearing a bigot? - I think Kafa and Abaad are doing a disservice to themselves with the media strategy they chose. Since last July, there were dozens of campaigns signed by either of the two organizations. Yes, they scored legal victories, unfortunately, they are now at the over-exposure stage. This sadly where the #metoo movement has headed - what started as a wave of women accusing powerful men of sexual acts against them now is more like "oh it's another one of those stories, what else is on the news?".
And this unfortunately where Kafa and Abaad have reached - another image of a distressed woman with a black background, another hashtag presumably to fuel interest and social media sharing, another set of logos from international partners. And several campaigns one on top of the other.
Even as someone heavily interested in media, I lost track of what either Kafa or Abaad are claiming today, I had to look at the ads several times in order not to confuse them with the now kaput 522 law.
I am not sure this is the way to go for any of the two organizations, I understand how difficult it is to have so many issues to fight, but "but it's another thing to inflict daily torture on the people of Lebanon" to misquote Morrissey - especially at a time when the social issues are already too glum and pushing people down.
My advice? Let go for a few months, give it a break, this will generate more interest when campaigns start later. At least they will be visible, as it is - they are not to be honest.
Posted by Tarek Chemaly at 9:13 AM