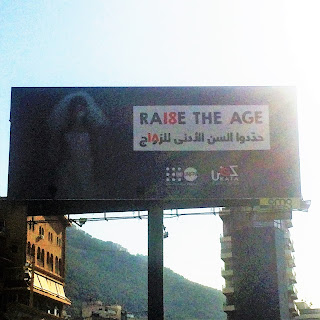 Kafa and Leo Burnett Beirut won a bunch of awards from the event they did on this issue (I read 8 somewhere and 9 awards somewhere else), to see the full video go here. The ad above, my own contre-jour photography not helping, might not be award winning but then - the message is clear. No more child-brides. Raise the minimum age for wedding (the campaign wants the state to raise the age till 18).
In parallel Abaad is doing a campaign which says "the white does not hide the rape" which is some sort of a protest against law 522. Article 522 of Lebanon’s Penal Code stops prosecution or execution of a penalty when the perpetrator of a rape, kidnapping, or statutory rape marries the person he has raped or kidnapped. It seems only 1% of the Lebanese have heard of the said penal code, and 80% think it deprives the raped woman of justice. 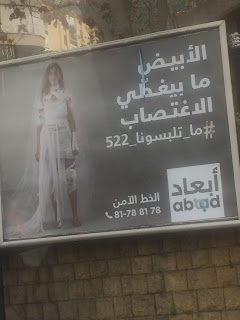 So there's a lot of campaigns going on for women - which of course is worrisome too because if the situation was not that bad, we would not be needing so much advocacy.
Posted by Tarek Chemaly at 8:36 AM