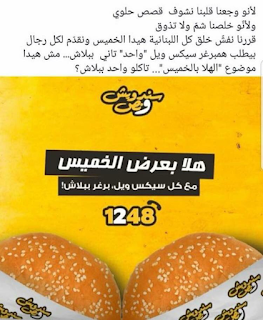 OK I admit I am not on top of my game as of late due to personal reasons, but here goes, while I was hiding under a rock (fine, it was not a rock but still!) there was a huge hit playing the airwaves called "hala bil khamis" (hello Thursday - the weekend start in Saudi Arabia) the song has grown so popular it is played in Ibiza. A wave of sexual videos have emerged with the song as a background by the way.
Sandwich w noss which has made its name via funky and copy-driven ads has jumped into the foray in an ad which looks like either two boobs or a bum (you decide!) and an offer for a free "six/sex wheel" burger with any such burger you buy (do not forget that the word six and sex spell the same in Arabic). I was sent the ad a few days back but back then was still in deep hibernation so did not get it.
The explanation for the ad has too many sexual innuendos to count by the way!
Mea cupla!
Posted by Tarek Chemaly at 10:36 AM