The Woz in Lebanon as Apple disappoints 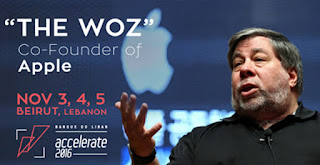 Steve Wozniak, co-founder of Apple will be in Beirut in the realm of the much-touted highly-advertised, several-times emailed "Accelerate" which is being held by the Beirut Central Bank with Marianne Hoayek helming the whole thing. Tony Fadell (yes, yes of Lebanese descent or origin or whatever as we like so much to brag!) inventor of the iPod and iPhone will be there too.
All of this comes when Apple - the scuderia they are or were part of - is disappointing heavily. iPhone 7 is nothing to write home about and apparently adding a TouchBar (mocked as transforming into a salad bar after hours) did not garner the interest among the fanboys which were left scratching their head for a MacBook Pro with headphone jacks yet a new iPhone without it - so according to Jony Ive head of design at Apple, it seems they believe in a "wireless future" just not on all their products.
Mind you - even if I am using an iPhone 5 - I am not the classic Apple fanboy nor am I rushing to buy a Google Pixel right this second (I could though, eat your heart out Zaher!) but the presence of these two Apple-bastion-defending people at such a "meh" time for the company is interesting. I wish I could ask them a couple of questions which would not be answers a la Tim Cook (Apple CEO) by a press-release platitude.