Miracle Mattress - an ad which could have come from Lebanon 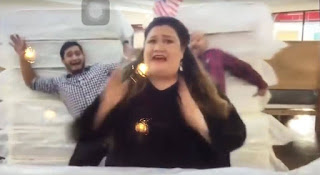 You may by now have heard of the Miracle Mattress 9/11 "spoof" ad which sort of mocked the events of the day in question when basically the earth shook (I am here speaking of the consequences which the world still suffers till now - numerous airstrikes were launches by the US on no less than half a dozen countries on that day in 2016 namely Iraq, Syria, Yemen, Libya, Somalia, and Afghanistan). Still Americans take that day very seriously, so the advertising in question is of very poor taste.

Of course, one of the first questions to ask is when is it a good time to start making light of tragedies - is 15 years long enough a time?
But this question aside, the Miracle Mattress advertising, is the kind which could have done in Lebanon: The one that puts the dark-skinned maid in the washing machine (an ad for a detergent in the 90s), a country with the highest selling steel wool is called "Negro's head" (but in Arabic called "slave's steel wool" with slave a generic term to people coming from Africa), where "Sri Lankese" is not a nationality but a profession (therefore the term "my Sri Lankese comes from Ethiopia" with Sri Lankese standing for house help), where xenophobia is so rampant it is actually unseen (regardless of the level of education of the person in question), where a chewing gum ad focused on a woman's cleavage with the headline "I do a bigger balloon", where an advertiser told me outright here launched an ad knowing that it would be banned but did not tell the client so (making me wonder about the ethical aspect of the client media booking when the person knew the ad would be taken off the airwaves), and the list goes on....
At least the Miracle Mattress branch that ran in the ad in San Antonio, Texas, got shot down, in Lebanon no such thing would have happened.
"We will never forget" says the saleswoman in the ad, in Lebanon, it seems more like, "we will forget"!

Posted by Tarek Chemaly at 7:27 AM