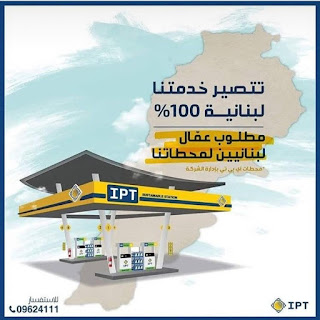 I shall start this post with a flashback - see here and here. Those links go back to Coral Oil - and I was butchered online for the funny joke the Asian worker said though quite late in the game. Actually, the butchering was not about the joke - it was about the Asian worker. How dare I be in favor of an Asian working at the gas station.
Remember when Sukleen got launched a billion years ago? They did that with a cute good looking Lebanese actor and the joke was that he was the only Lebanese working there. Why? Because (oh Tarek you and your stereotypes!) all the people in Sukleen overalls on the ground were Syrians.
The other stereotype? That Egyptians actually work at gas stations (Egyptians do the filling and the Asians are more delegated to the car washing bit).
Which brings us to the IPT ad recruiting Lebanese people on their gas stations "so that our service would be 100% Lebanese".
All right, how about this stereotype? A Lebanese would rather die from hunger than work at a gas station... (... in Lebanon. He could easily do it in any other country where he would pretend to be CEO because no one sees him on the daily job).
This post is full to the brim with stereotypes.
Here's a riddle: Is it still a stereotype when it is actually true?
Posted by Tarek Chemaly at 2:15 PM