On God and the Lebanese revolution 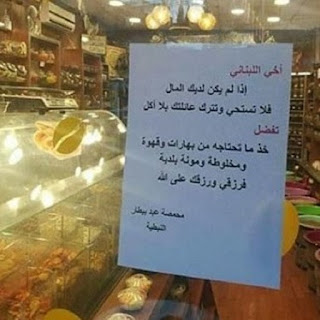 One of the loveliest things to come out of the reolution that Lebanon has been experiencing since October 17, is those altruistic gestures filling people. People are really waking up to the needy, to those now rummaging in plain daylight in dumpsters, to those living under the poverty line and all this done in a dignified way (OK so some make sure cameras are there as they visit people who need help but am disregarding those). I also like the many many shops who put signs which losely transate as "dear citizen, if you do not have money to pay, please take what you need, my livelihood and yours are on God".
Let me repeat: I like all these fundraising initiatives, and repect them all. My problem is that for a revolution that wants to abolish the "nizam al ta2ifi" in Lebanon (or Sectarian system) I still see the stress on God everywhere. I touched on this point earlier when speaking about women and their stereotypes in the revolution. The gist of it is this: "For a revolution that wants to get past faith/sect issues, no matter where I turn, I see them emphasized as if saying "we want a united Lebanon in spite of our different faith" as opposed to "regardless if we believe or what we believe in"." As I said, how can we get past the Secterian system when even those wanting to abolish it come back to religion all the time (and the step being "religion" and "sect" is too small believe me). I am not claiming I have a quick solution, but what I have is perhaps a small notifier: Try not to bring God into the equation when you claim you want te so-called Sectarian system to be abolished, somehow, it's as bad as the image below: The Islamic wing of the communist party - workers of the world pray on the prophet! 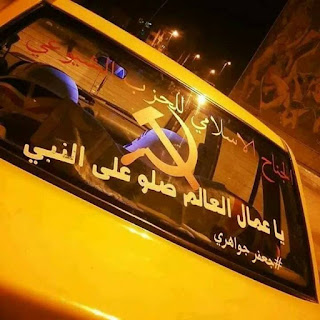 And with this I shall leave you with the words of (Nobel Laureate!) Bob Dylan: "If God's on our side/He'll stop the next war".
Posted by Tarek Chemaly at 1:32 PM