A ministry of Industry campaign too ironic for its own good. #بالوطني_بدعم_وطني 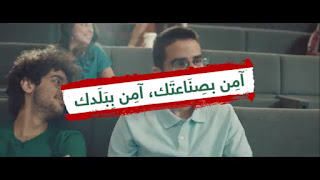 So the Lebanese Ministry of Industry has a movie to promote Lebanese consumption. See it here. In itself the task is tough. The movie goes in all directions at once. Now if the purpose of the movie is to promote consumption of Lebanese products - mentioning Euro Disney generators is a tad strange, or how international companies use our robotics (neither of these are FMCG items), if the backbone of the economy is thyme and summac then we have a serious issue! The main problem is that the movie has too many ironies for its own good an keeps shooting itself in the foot that way - too many jokes about the economy, too many dismissive responses from students, and honestly, no coherent clear message. It does not help the casting is less than optimal as well. Plus there is a tag to boot: #بالوطني_بدعم_وطني
So the takeaway is: Where do I buy those Euro Disney generators?
This being said why did they not stick to the nice slogan:
بتحب لبنان؟ حب صناعتو
You love Lebanon? Love its industry
In one of those "if it ain't broke don't fix it" cases. 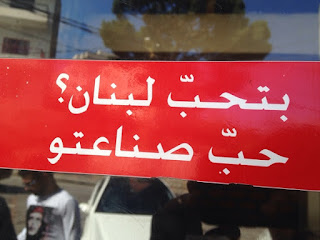 The slogan which was coined when slain Minister Pierre Gemayel was Minister of Industry, has firm roots in an old poster by the Phalangists (which were created by his own grandfather - Pierre Gemayel after whom he was called), the poster in question (circa 1976) is below:
You love it... Work for it.
The analogy between the two slogans is uncanny once you think about it.
Posted by Tarek Chemaly at 10:13 AM