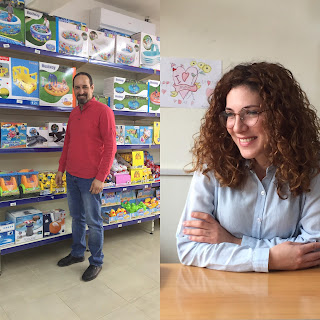 Disclaimer: This story was commisionned by the EU to cover their funding activities in Lebanon, and was published originally here.

Ibrahim and Rayane Koussa, left Nigeria to open a small store which is now, with the help of the European Union (EU), a two-branch business anchored in their extended family in the north of Lebanon. The young couple beneficiated from the Economic and Social Fund for Development (ESFD) which is supported by the EU.

Rahbe, in the north of Lebanon, is not often in the news, despite it being a pristine, picturesque village with a lot of greenery. Whereas Lebanon is not exactly big as a country, most work and administrative management tends to be concentrated in the capital, Beirut.

The Lebanese diaspora in the world, was for a long time a pillar of the economy, with Lebanese being going abroad to seek work a common currency. Africa is a continent which received the lion’s share of Lebanese seeking work. So, within this atmosphere, the story of the Koussa couple is nothing short of an oddity: They came back from Africa to open a new business in a remote part of Lebanon, with the help of funding from the European Union through the Economic and Social Fund for Development (ESFD). ESFD is part of the Euro-med Partnership established between the European Union and the republic of Lebanon since November 2000.

Rayane Koussa and her two children, now aged respectively 9 and 6, remigrated to Lebanon from Nigeria six years ago, with Ibrahim - her husband - supposed to follow a year later. He only lasted one month alone, far from his family and it was not because he was unable to take care of himself. When teased he answers: “No! We cooked yesterday, spaghetti is my specialty, I did bechamel spaghetti! We are a working couple, so it is only normal to share house duties”. Rayane only confirms his culinary skills, “oh yes, all I had to do is heat it in the microwave!”.

But let us go back to the beginning, we are with Ibrahim in Halba the capital of Akkar Governorate in northern Lebanon, in the underground warehouse dubbed “Ta2tou2 CITY grand hall”, which spreads over 900 square meters, 50 of which are a small entrance and a stockroom. Ibrahim, tall, rather conservative in character, is welcoming and very customer-friendly.

The place looks like a paradise for kids, filled with toys. Look a little further in the back and you see bicycles, mini-cars, gadgets, plush toys, and basically all the colourful items that make children’s imaginations run wild. Actually, backpacks and stationery still have their own corner, even if the school year is drawing to a close. A grandmother goes to the cashier manned diligently by Ibrahim with a stroller in tow, “Mabrouk!” - the Arabic for congratulations, he smiles at her sincerely.

Actually, there was no such place in the region, the demand was high, especially that the name became synonymous with such novelty and fun items - but also original branded items as opposed to knock-offs. The name Ta2tou2, pronounced “Taqtouq” was wittily chosen as it means in Arabic somewhere between “bic à brac” and “fun item”.

Ibrahim took a loan from the ESFD made possible thanks to EU support in the shape of “a rotating fund which started operating in 2003, when a study revealed that 87% of people work in small and medium enterprises. This excludes them from classic bank loans which give a maximum of 5000 USD under a “private loan”. This according to Helmi El Hage, senior internal control officer at the ESFD. The successful couple took, not just one, but three loans, the first already repaid at this stage. “It is possible to do so when loans are being repaid on time and this after a year” says El Hage.

The Koussas used three loans for several objectives, the first was to launch the original two-door store in Rahbeh and insure it is filled with stocks from suppliers. It was valued at 37 million Lebanese Pounds or €22.500 at the current conversion rate.

Once the original loan was repaid, they took a second one which was specifically used to arrange the interior of the newly opened “Ta2tou2 CITY grand hall” in Halba which opened 14 months ago when it comes to shelving, interior decoration, refurbishment and was of 75 million Lebanese Pounds or the current equivalent of €46.000.

The third loan of 12 million Lebanese Pounds or €7,000, was used to connect the new Rahbe shop (which was across the street from the rented original) to the shop next to it, and eventually the apartment above it with an internal staircase and a large two storey glass facade. The latter, with its extensions, is barely one month old. “One of the main reasons that brought us back is family, plus our children can have a social life and learn Arabic”, says Rayane, curly-haired, bubbly, extremely extroverted and with a disarming smile. “Sunday lunch is a feisty affair, an assortment of in-laws from both sides, and extended family end up dropping by” she adds. “I close Halba’s store on Sunday but in Rahbe, I open it for two hours in the morning and three in the afternoon” Ibrahim adds.

During weekdays, between 1 and 3:30 P.M. Rayane takes a break from the shop to be home when the children get back from school and help them with their studies, in the meantime, the shop is taken over by her own mother. In terms of job creations, which is one of the objectives of the EU through the ESFD, the Halba store is now staffed by Ibrahim and three other employees, whereas the Rahbe store has three employees including Rayane.

“Well, I can safely say that they have courage and work extremely hard”, says Abdallah Ishac, one of the four representatives of the ESFD in the north of Lebanon.

“I help people do the feasibility study, sometimes we go back to their suppliers’ invoices and compare to the current stock available to estimate the amount of sales done in a year” says Ishac. “The clients I brought currently have zero default” he adds, signalling that since he started, he must have had around two hundred cases he followed up. The ESFD estimates that, through the EU funding some 7,500 jobs were created in the north Lebanon alone since the fund started.

“For a long time our default rate was 2%” says El Hage, “only lately due to the economic downturn we got to 5% in arrears which is a very respectable figure. This is why we still have very high credibility vis à vis our partner banks”, he explains.

As for Ibrahim, he declares in a very business-like tone: “I basically have five seasons - Christmas is when I sell a lot of decoration and fake trees, then Valentine’s day - where the Halba store does a better business due to the perfumes and cosmetics section there - then Easter - again, with decorations - summer season - with inflatable pools and floaters - and eventually back to school - stationery and such. A small side season is Saint Barbara where disguises are sold as well.”

“I don’t think the Halba store would have had such a strong start if the name Ta2tou2 was not already known in the region. I insisted on being the only one who had original perfumes as opposed to cheap copies. The make-up section in offers low-end and accessible brands, but also high-end products” says Rayane. Clients from all socio-economic levels visit the store, “I never ever want anyone to feel the shop is not for them”, she proudly beams adding. The store also stocks beachwear, fantasy jewellery, and gadgets in addition to watches and other items.

“In Rahbe there is a possibility to sell either at a small discount to the client or on credit, as most are either relatives or friends. In Halba it is a little more complicated since I am not from town, but what I do is that I can put things aside that couples choose when expecting a baby. They pay by monthly instalments and once the baby is here, they can pick up their stuff. Baby furniture makes brisk business.” Explains Ibrahim.

“Last year a client came and picked my most expensive inflatable pool at 1,4 Million Lebanese Pounds, he asked for a small gesture at the checkout, and it sold for 1,3 Million. Feeling he was well treated, this year he came back for a trampoline.” Notes Ibrahim.

“Well, this young couple has heart and guts” says Ishac, “they jumped on the opportunity of the warehouse in Halba, they renovated the store to such incredible high-end standards. Sure, they perhaps can sell more if the economic situation of the country was better, but they work hand in hand in both branches to make things happen on all fronts”.

“I kept telling Abdallah, it will be difficult for me to get a loan, I already went to a bank and they sent me packing, but truly, it was easy, it was accessible and here we are!” ponders Ibrahim about his experience. “In the end, thanks to the ESFD, I made up for what I left in Nigeria” - he concludes - “and much more”.

*In Lebanese slang, the “2” is used to represent the “ ء ” when writing Arabic words in Latin letters.

Posted by Tarek Chemaly at 7:39 AM