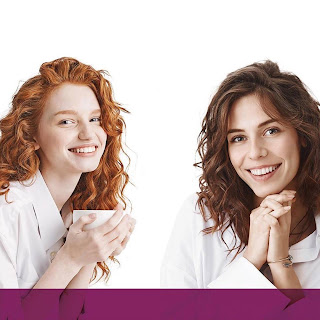 Taanayel Les Fermes seems to have had a Damascene moment, after an online campaign launched by Patrick Chemali (no relation) about their use of non-local looking models, it seems they have backtracked a little (notice the difference between the redhead on the left and the more Lebanese looking brunette on the right hand side of the photo who was used in an ad just a few days after the first).

Yet just to be honest, Taanayel is not the only one who does this. I once saw an Asian baby with slanted eyes in a milk ad on billboards - what target audience will relate to that is beyond me! No Lebanese woman would see her baby in that photo or feel compelled to use that product.
Surely, when Julia Roberts is the face of the Lancome perfume or George Clooney is the ambassador of Nespresso then one can understand the international element. Actually, it seems that even then some people have hiccups with it: Story goes that when Amal Alamuddin's grandmother was told her granddaughter will be marrying Clooney, she supposedly said "what? There are no more Druze men left that Amal finds worthy of marrying?" (inter-faith marriage is indeed very important to the Druze faith of which Alamuddin is a member).
So again, I do understand the use of images from the net, or from Shutterstock or whatever, but some logic in the used images would be really beneficial to everyone. Specifically the brands in question!
Posted by Tarek Chemaly at 9:34 AM