Salah Noureddine a Gilet Jaune made in Lebanon 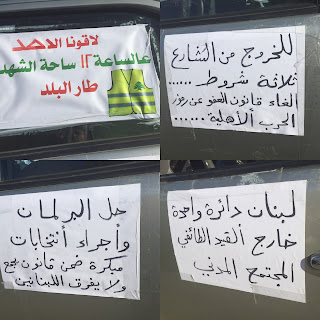 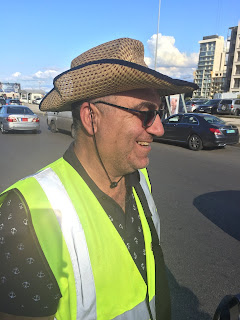 Ladies and gentlemen, meet Salah Noureddine - a gilet jaune made in Lebanon. I met Salah as I noticed his car plastered with socio-political slogans and of course his "gilet jaune" you could spot from a mile next in downtown Beirut. This is not Noureddine first foray into the civil society, as he had already submitted his candidacy to the 2018 elections (he did not even vote for himself!). Noureddine is spearheading a local gilet jaune movement with very specific objectives:
To walk back the law which forgave Lebanese figures about their war crimes.
To dissolve the parliament and do early elections under a law that gathers rather than separates the Lebanese.
To put Lebanon under one electoral jurisdiction separate from sectarian influences.
Apparently Ragheb Alameh's new song "Tar El Balad" (the country disappeared) is the official anthem of the movement. There is also a call for action on Sunday 23rd of December on Martyrs' square.
Noureddine apparently was sued by none other than the speaker of the parliament Nabih Berri and wears it as a badge of honor. And the man puts his money where his mouth is as he is actually injecting cash in this movement (he already bought 600 gilets jaunes - not the people the clothing item! and organized a manifestation in London - where he resides - just as PM Hariri was there).
So there, Noureddine is quite serious, if Lebanese are too remains to be seen.
Posted by Tarek Chemaly at 8:41 AM