#wifey: I agree with Gino, but also disagree 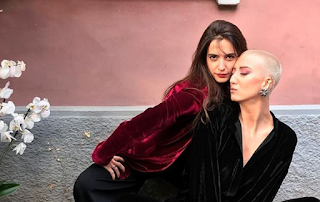 Gino Raidy has a super article on the blog detailing that the "wifey"-scandal which erupted a while back as two women posted a photo together one of them captioning it with "wifey" is everything wrong with Lebanese "journalism".
I totally agree with Gino.
But also fundamentally disagree.
Sorry if this seems a bit confusing.
But here's the deal.
To begin with, Lebanese law does not recognize blogging as proper journalism. Seriously. I am not sure the law is to be blamed here considering journalism passes above all through highlighters and restaurant "reviewing" - meaning anyone who discusses more in-depth topics are bundled up with the rest of them. But that is not where Gino and I differ in thinking.
I am hereby quoting a part of Gino's article:
"At a time when the LGBTQ+ community in Lebanon is making significant progress, and being openly gay, bi, lesbian, trans and queer is becoming more and more acceptable, the sore losers who think it’s their business what consenting adults do in the bedroom never miss a chance to lash out."

This is not the first time I hear such argument. Do we have a civil society defending anyone from women, to the LGBTQ community, to minorities or house helps or whomever has their rights endangered? Of course we do. And I have via this blog, praised their job continuously.
But to say that "LGBTQ+ community in Lebanon is making significant progress" is frankly a long, long stretch. I teach at university level, and trust me, the things I hear from students or even colleagues at times are beyond appalling to anything or anyone different from the norm. If I am singling out university and not even speaking of clients, or society at large - more on that later - it is because this is the place where supposedly ideas as talked about and discussed and researched. Newsflash: They are not.
In the last few years, there was a project for a graduating student whose premise was: "everyone is OK with homosexuality as long as it is not in their family" and the student in question - overtly homophobic - was defending it vigorously. One of her advisers flaunted the idea that she should quit it - not out of doctrine or human dignity or anything - but because "what if one of the jury members who attend is "like that"?". The "like that" bit obviously refers to an "unspeakable" sexual orientation that does not deserve to be stated publicly. And that, let me remind you, is a university level coming from as student and a adviser.
Society at large?  Well take this example that happened a couple of years back. A taxi driver I hailed in Beirut saw two youth walking and looked at me and said in Arabic "leik howde el gayyet" (Look at those gayyet). "Gayyet?" - condescendingly as if I was too stupid to understand he explained "gayyet ya3ne gay bil jam3" (gayyet is the plural of gay). Sensing an opportunity to taunt him I ask. "Oh what is that?" - again treating me as a total idiot he answers "men who want to be fucked". "And those who fuck are not gays?" I very innocently asked. "No" he adamantly answered.
I shall leave the misogynistic stories, the ones related to race, or skin color, or ethnicity or whatever for some other time. As I am trying to reply to Gino about the LGBTQ+ angle. Sorry, but I sincerely believe that "progress" is not truly taking strides as Gino says. Maybe in a certain "bubble" it is, but in the fullest meaning of the word for Lebanon at large, I beg to differ.
Posted by Tarek Chemaly at 9:20 AM