Take Action تحرك a worthy even if multi-vocal initiative (UPDATED) 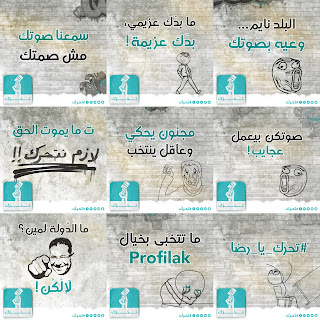 Lately on the streets there are billboards enticing people to "take action" and under them "for the country to remain". This is for the 2018 parliamentary elections. A bit of probing online resulted in the photos above.
From their facebook page I copy pasted the below:

Vision: We seek to motivate young people to participate in the upcoming Lebanese parliamentary elections and to make their voices heard, with the ultimate goal of a brighter future.

The Mission: Raising awareness about the importance of youth participation in political life Promoting a culture of democracy that harbors a clear expression of the principle of freedom and human rights.To work on changing the social behaviors and attitudes by consolidating the concepts of democracy and active participation in decision-making.To foster youth groups capable of directing public opinion, communicating,with potential voters and encouraging them to vote.

Principles: We believe in young people’s abilities of to contribute towards building a prosperous future. We believe in a democratic society free from all forms of discrimination. We believe in youth participation in the electoral process, regardless of political affiliation.


Now, on the one hand this seems like a shoestring operation done by youth who want to see democracy and democratic thinking widespread. On the other, since there are billboards on the streets, therefore there was funding from somewhere (no international funders' logos appeared on the billboards, but from what I understood four NGOs are behind the campaign: March, Utopia, Lost and DPNA). Lebanese blogger Gino Raidy seems to be on board. And photos of young participants abound.
OK to be honest, I feel the campaign is treading where everyone else has gone before - not least of which using the analogy of "ballot" and "voice" in dual sentences since they both spell out as "sawt" in Arabic. The illustrations and the dull background do not help either. The multitude of hashtags used is a bit old hat (honestly apart from Instragram and Twitter not sure anyone uses hashtags anywhere).
Oddly - conceptually - campaign reminds me of the "fakker sa7" (think right) which was launched by the Free Patriotic Movement (at least at the beginning of the 2009 parliamentary elections before the campaign went overboard with conflicting and odd messages). An invocation for people to participate and think about their options rather than vote blindly for the status quo.
At the risk of attracting an avalanche of criticisms, and whereas I do support the idea of people enticing democratic thinking and practices as "take action" is doing, I am a bit skeptical - this has been tried and tested too many times and look where it got us.
But some people do not lose hope. In a off the record conversation, I was told from inside the campaign: "Lebanon is a hopeless case, at least that’s what the youth think, and this is what all the events and activities are revealing from North to South. It takes a lot of effort to get them interested and willing to take action, or at least to get them to understand the importance of their role and their influence given their large number!!"
As the English proverb says "you can lead the horse to the water, but you cannot make it drink" - problem is: What if people want this pseudo-feudal clientage system? What then?
The caricature below is a good sum up: 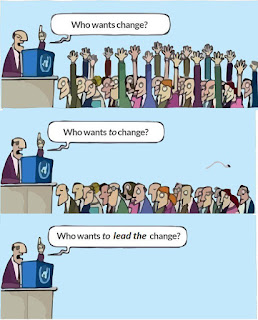 Posted by Tarek Chemaly at 8:32 AM