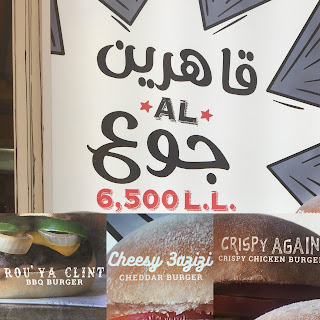 Malak al Tawouk has a new line of cheap burgers, but it is not the prices that are of interest to me - bur rather their names! "Cheesy Azizi" the cheddar burger, "crispy again" (a play on "kiss me again" the most famous mock-insult) which is crispy chicken burger, but the most funny is "rou'ya clint" BBQ burger. The expression initiated by the Theatre de 10 Heures in one of their plays and refers to a former militia men following the end of the war as he saw provocation in everything and was trying to calm himself down with the now classic expression "calm down Clint (Eastwood), calm down".
The expression became part of "Alternative Facts" project, or my rewriting of the history of Lebanon via pop culture.
And whereas it does not appear in my photo, I should mention the "Juan el Ghoul" burger named after the famous 90s dubbed Mexican soap opera that swept the land back then!
Posted by Tarek Chemaly at 7:22 AM