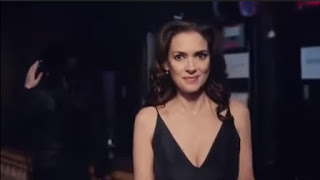 To those who are as ancient as I am - they might recall how Winona Ryder was the "it" girl of the 90s. Not just her career but also her choice of partners. Her star was dizzying and on the rise and rise Then in 2001 it all came to crashing halt as she was convicted of grand theft and vandalism for stealing designer merchandise from a department store - including a Marc Jacobs cashmere sweater. What is interesting is that for her court sentencing, Ryder was dressed by a designer called Marc Jacobs basically sending the message "I-do-not-need-to-steal-the-designer-I-can-get-dressed-by-him-for-free".
But Ryder rebuilt her career step by step, and is now one of the sensations involved in "Stranger Things". L'Oreal picked up on the cue, and is featuring her in a beautiful ad which centers only about the actress. The end line? "Everyone loves a good comeback. Damaged hair deserves one too".
There were people who disliked the ad, but for me it is the epitome of smartness. Simply because Ryder is having her moment in the sun once more (while still not have lost her original wackiness).
Johnny Depp replaced his "Winona Forever" tattoo with "wine forever", but it is indeed Winona Forever. The L'Oreal ad is right on target. Watch it here.
Posted by Tarek Chemaly at 8:35 AM