Hallab moves in Jounieh - with a brand-cheapening ad 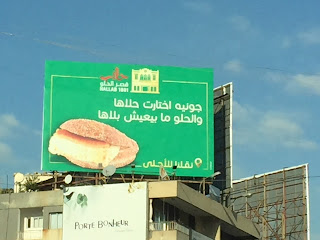 "Jounieh has picked its sweet, and the sweet could not live without it" (in Arabic it rhymes). Indeed, Hallab has moved to a new location in Jounieh not too far from the one it originally opened in (only a few years back). I am not sure about using colloquial Arabic rhyming (or what we call "errede" in Arabic), it tends to cheapen the brand rather than make it closer to the public. Using the official Arabic would have projected a more upscale, refined image of Hallab. There are several variations to the sub-headline one of them was "7allayneha bil na2le" (we resolved it in the move but also means "the move got sweeter") and the one above "we moved to a better/sweeter place".
Still, I am irritated about the brand-cheapening message in slang Arabic. The line is too cheesy, even for kenafeh!
Posted by Tarek Chemaly at 9:04 AM