Uber Express Pool is Lebanese "service" (with a fancy name) 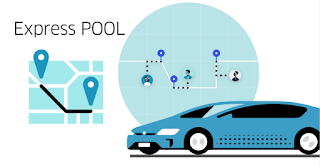 So Uber launched the cheaper "Express Pool" - which basically means you walk a few blocks to a "smart spot" and join the ride with other people - you will be dropped off to a location easily accessible to your final destination and save 25% of the fare. So far, so good.
In 2001, Agnetha Stahl explained the same principle while lecturing at Lund University. Her remarks were that "people spoke much more to each other" (at the time they were using Fiat Multipla to pick people up and were experimenting it in Malmo in Sweden).
So at the end of Stahl's lecture, I raised my hand and said "but this is what we call "service" in Lebanon!". Service or share Taxi are cars that run along certain circuits and you can pay 1,33 USD for it.
Just like Bodega, the app that turned out to nothing more than a vending machine, this is another invention that has been done before. I guess the digital world is simply replicating preexisting analog models and calling them "inventions" and "breakthroughs".
All of this reminds me of the joke about the invention that lets you see through a wall.
It's called "window".
Posted by Tarek Chemaly at 12:44 PM