Living in the not-so great outdoors: OOH in a tight spot.

Under the Antelias bridge on the highway, there is still a billboard with Christmas greetings on it. Since we are already in July, it's too late for last year, and too early for the next. On the Jounieh highway a unipole is advertising a New Year's program on it. It has not been changed or booked since then.
I have made this point before (here) but year after year the state of the outdoor advertising seems to go from bad to worst - but not if you ask the players of the game who always come up with formulas such as "outdoor is still the most cost-effective form of advertising" (an actual quote) or "we are always fully booked and investing in a digital network" (again another quote), and so on and so forth. But the billboards themselves do not lie.
Are there traffic jams on the road? You bet. People still go to work or crowd the streets on the weekend to go the beach or go down from the mountain at the end of the weekend. But do they look on the billboards when stuck in the traffic? No, they scroll through their cellphones which they plugged on the chargers, they chat on whatsapp, see their facebook feeds or whatever else they do on cell phones. They do not look outside their small screen to see those billboards in question.
But the people who own the networks still claim they are healthy, even if two players eventually merged because of the decreasing income coming from such ventures.
Periodically, municipalities tend to cull the jungle which comes back with a vengeance. Oh, and there was a law somewhere orchestrating outdoor advertising but not sure anyone ever heard of it. Still, the outdoor scene is definitely no longer in its heyday. With ads going digital and online (and Facebook and Google taking the lion's share of the money involved), no one waits for the billboards to inform him/her of such and such event. Because either you already like the venue on facebook, or the artist himself or someone shared a link of it with you from your friends' network.
With many companies now involved deeply in real-time marketing and news-related gimmicks there is little time to print, book and plaster such ads online when they can simply be tweeted or shared directly via social media rendering the booking costs to a dismal zero. The Oreo ad which aired during the 2013 Super Bowl blackout in 2013 is still a case in point: 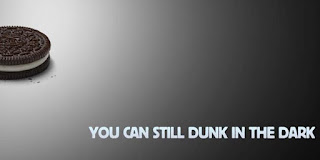 Sure, like newspapers - outdoor is not going to die completely. But just like newspapers and magazines must give priority to online editions, outdoors need to really review their strategies and adapt to a market which now needs their services less and less. Or they end up with Christmas and New Year's ads right in the middle of July: Too late to them off and too early to change them.
Posted by Tarek Chemaly at 7:02 AM