#Muslimban - We didn't cross the border, the border crossed us! 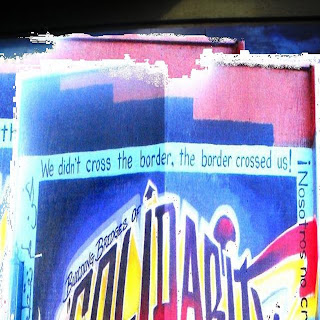 The "we didn't cross the border, the border crossed us" comes from a line from the band "Los Tigres Del Norte" (from their song "Samos Mas Americanos") and the image above was shot in San Francisco by myself (either in 2010 or 2011) of a huge mural present there (the layout was part of my video art movie 11-9-11). Of course the topic of the day is the executive order of the President of the United States banning travel of people from seven Muslim-majority countries into the United States.
First, let me tell you as someone who went several times to the US, even with a visa (whose interview requirements are a bit whimsical depending on the interviewer you get) landing there is several hours of talking to Homeland Security people only one of which (just one) throughout my travels was kind, humane and respectful with me. It is worth noting that your religion plays little in the process, I, for example am a Christian. And trust me I had no favor and was treated just like the woman in hijab next to me and like that wonderful blue-eyed Iranian elderly scholar who was wheelchair bound and coming to visit his daughter.
Well, the United States needs to be protected. We all agree to that.
Now, protected from what or from whom is a different story (even philosopher Kim Kardashian agrees to that).
It is interesting to note however, that the seven countries which faced the travel ban do not include Saudi Arabia from which stems the majority of the perpetrators of the 9/11 attacks. So I guess the ban only applies to countries whose butt-we-can-kick as opposed to some ideological reason.
Again, it is easy to say that but as a Lebanese you are already SSSS upon entry to the US. Don't know what that is? Secondary Security Screening Selection. Meaning, you automatically go to be spoken to, questioned and quizzed. Once more, one understands the need of security especially after the 9/11 attacks but well, you don't get a visa simply by knocking on the embassy's door. You come armed with all sorts of paper works, all proofs necessary for them to believe you.
But again, make no mistake, religion plays very little in this. I often hear "of you are a Christian, the visa should be so easy for you" - really? The EU has made it a little - just a little - easier to get visas via out-of-embassy surrogate offices, but even then the length of the visa is (again that word) "whimsical". I had my last visa (which was - I forgot the count - around my 14th perhaps to the Schengen states) as a "multiple entry". My jubilation was short-lived when I realized it was a multiple entry available for six weeks.
If my travels taught me anything, neither your education, IQ, gender, politeness, religion, sect, marital status, can save you from being cross-checked at airports. The latest fad is to check your visa with a magnifier to make sure it is authentic. The Lebanese passport, whereas still not included in President Trump's list is already at a disadvantage. Among others we have to thank Ziad Jarrah the Lebanese who happened to participate in the infamous 9/11 attacks, but even before him things were not rosy.
Naturally, I am one of the many people who (for various reasons) am discouraged to travel as of late. Many of my friends - mostly academic people or creatives in the advertising industry - are also avoiding to venture out. The visa, airport checks and all else is becoming too much of a burden. Instead of heading to Europe or the US other choices such as Nepal or Sri Lanka are becoming the order of the day.
The only consolation is that, away from executive orders, there seems to be a new emphatic streak in the American population. Suddenly, there seems to be more and more people realizing how bad it all makes them look, how backward, how pitiful. But then again, whereas he did lose the popular vote by 3 million votes, he was democratically elected: "as you are so you shall be governed".
Posted by Tarek Chemaly at 8:33 AM