Blogging as an echo chamber 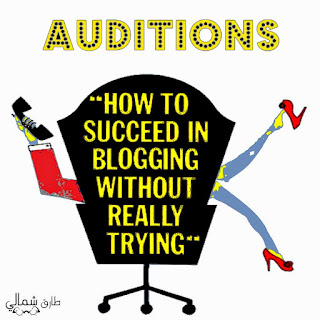 "Blogging is for those who have nothing to say"- this shocking statement comes from the owner (not just CEO but outright owner) of a bank in Lebanon. This came on the heels of me suggesting to create a blog where all employees of the bank can participate in.
Very recently, a banker friend (Ok, different bank but same sector) told me he met a person who introduced himself as "one of Lebanon's most known bloggers" - the casual way my banker friend was talking implied a bit of "meh" attitude, and he only mentioned because his wife told him I had a blog too.
We bloggers tend to feel very important, being chased by brands to be their "ambassadors" because we are "influencers" and have "high readership" - well, I am not a numbers freak but the sheer volume of people who go to my blogs daily frightens me. Yet, for all the bragging about visitors and clicks ("are they single visitors or multiple clicks per person?" I remember the frantic question of a woman who contacted via a PR agency) and away from PR agencies and advertising executives and client marketing teams, is there a readership outside this self-feeding echo chamber?
Yes, yes, I know, once in a while a blog post from some blogger goes mainstream, garners readership because it so happens that it is the topic du jour, or because of some controversial title or whatever (note - it also happens to me so no finger-pointing here), but mostly - whether we like it or not - blogging is mostly confined to those who "have nothing to say" (but a lot to take for free - except for those like me who resent freebies for no apparent reason that makes sense to anyone but me - the banker friend was bewildered I do not put ads on such a high-traffic site).
Having been a blogger for 10 years, I have seen bloggers come and go, get "real jobs", I have seen some leaving real jobs to be "professional bloggers", I have seen blogs shoot straight up the food chain, then disappear for lack of interest or because their owners used them to jumpstart some lucrative career on the side.
Blogging, with or without readership involved, takes dedication, effort, and - to me at least, someone who comes from the old-school journalism - a lot of ethics. I do understand that people who are predisposed to agree with us (whatever point of view we are making) are those who end up reading us, and it is so easy for us to fall into the slacktivism bait to clear our conscience and convince ourselves we are making a real difference in the world around us, it is also easy to think that a hashtag over twitter does all the change we want.
But let's face it, "liking isn't helping" as the Crisis Relief Singapore ad already said. And to twist those words, "blogging isn't helping" either.
I am in a privileged position as a university lecturer, as an artist even, to be able to communicate with people and try to engage in conversations which might - just might - take them out of their comfort zones. Sure, it does not work every time, but one must try.
In a guest lecture in 2009 I had been giving at the American University of Beirut about graffiti and street art, I found myself explaining one specific artwork, emphasizing the fact that the word “gay/homosexual” and “deviant” are the same in the Arabic language (Chaz). It said: “Who is deviant? Your mother is deviant. I am only a homosexual.” Someone in the audience immediately replied: “Only…. a homosexual?”
Naturally, the presence of such a narrow-minded person could have been left undisturbed. However, I decided to take the bull by its horns and I said: “Studies have shown that people with the most homophobic tendencies are the ones who unconsciously gravitate towards homosexuality.”
The simple retort might not have been earth-shattering for the macho man in question. But maybe, just maybe, it allowed him to think - I knew later that it created a stir among the students. So better a conversation than a complete denial I guess. 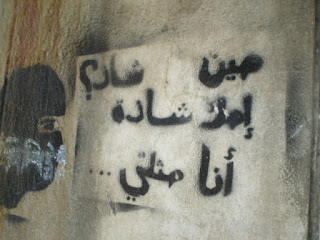 Lest this post be understood as someone who is giving up, it is not. But at least I have the guts to admit to the limitations of what I am doing here.
But try we must, and as I said in a different post, I chronically come with "high expectations" (no, not the book!), so as Bertoldt Brecht said, "how fortunate is the man with none"!
Posted by Tarek Chemaly at 7:25 AM