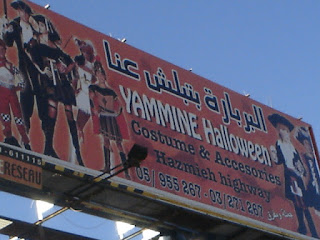 Originally published October 7, 2009:
OK, here's a super-bastardized concept!.... Another mish-mash whereby Lebanese adopt globalization while keeping the local twist. Halloween is naturally associated with costumes and masquerades... And it falls on October 31st. St. Barbara, a local tradition in the land, is also associated with the same rituals (Children dressing up and going trick and treating) while singing "bissiye Berbara, wel amh bil mghara," (Barbara the cat, and the wheat is in the cave)... According to legend, the reason she is associated with disguise is that when the emperor was torturing her by dragging her behind a chariot, the people could see her face changing into that of animals. Another story is that while being freed from prison in the middle of the night she had to put charcoal on her face so as for the guards not to notice her. The rest of the story goes that children, when not receiving a generous tip from the lady of the house would chant: "Arguileh faouk arguile, set el beit bakhile" (Hubbly bubbly upon hubbly bubbly, the lady of the house is stingy).
Which brings us to the Yammine ad, a place specialized in costume rental!... It reads "Yammine Halloween", but also "The "berbara" (Celebration of St. Barbara) starts with us"!... As if one festivity is equal to the other. Which is not the case.
Posted by Tarek Chemaly at 3:54 PM