Are advertising ideas ever "owned"? 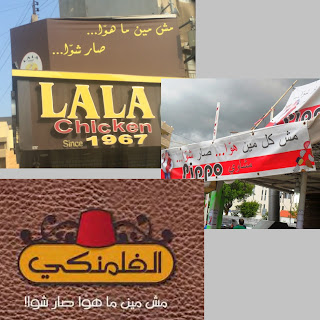 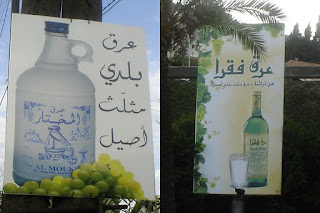 The above ads, which show, for three different food outlets the use of the same slogan, are a typical case in point. All three of them use "mich min ma hawwa sar chawwa" - not everyone who grills becomes a professional barbeque-er. The two other ads, for Arak brands also state "triple distilled, homemade, geuine" even if Arak Fakra has hammered us with them for years, the Mokhtar Arak reversed their order to supposedly come up with a "new" slogan.
In case you do not know, ideas cannot be owned. What can be copyrighted is the execution of these ideas. In advertising, there are two different crimes (yes, legal crimes according to the international law of copyright protect), the first is called "counterfeit" the second "plagiarism".
The word we all use is "plagiarism", actually mostly this is counterfeit. Counterfeit is when there are enough similar elements in two advertisings to confuse the viewer which one was the original and first, and which one was later copied - since the distinctive/creative element in an advertising could be visual or copy (word) based, then one must look into this as well from two angles. Plagiarism is when an ad is copied, in both concept and execution, you might argue "who is stupid enough to do this?" - well, go back to my archives on this blog and enjoy the wonders of stupidity.
Still, after 10 years of blogging, it has become - paradoxically - more difficult for me to pinpoint a theft. What I am doing is putting the two ads with the headline "compare and contrast". Sometimes the problem is lack of research, many advertisers do not have research departments in their agencies, hindering them from knowing what was done before. Besides, since the advertising industry feeds on the youth, a youth whose visual memory is too short or hampered, then these same people end up creating ads which were done before thinking they are inventing gunpowder.
I think what is worrying is when people demonstrate a pattern of copying (I can think of two names in the market skirting the ethics of advertising creativity by "borrowing" ideas left and right), this is when - whenever a new campaign signed by them shows up, my instincts tell me - "what does it remind you of?".
This is sad as in the plethora of genuinely creative ideas which these people come up with, they have tarnished their legacy and their name. And the name we have is our only weapon in this industry. But as I look at the ads above, I feel a tinge of despair for people who either intentionally or unintentionally ended up replicating something which already existed prior.
How sad is that?
Posted by Tarek Chemaly at 7:53 AM