Jaune the #nofilter of Rectangle Jaune 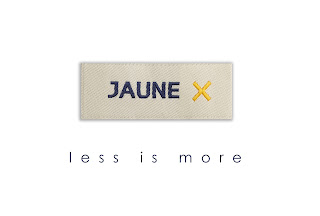 "Less is more" said Mies Van Der Rohe, and Rectangle Jaune took it to the letter, well to the 9 letters since it dropped "rectangle" from its name. So to get the facts right, this is not a sub brand aimed at a different market, more of an evolution rather than a revolution, and a way to distill the essence of Rectangle Jaune into the basics of it - good quality clothing and instead the long label a yellow cross on the second button and a simple Jaune do the trick to indicate the provenance of your shirt.
Let's face it, if you are no a French educated person pronouncing the label is challenging to begin with, so Jaune cuts it up and eliminates the confusion. Good linguistic start one might say. The new shop, the Jaune that is, has rough wood and dark steel i.e. more "warm" feels, which let us admit it - is a world away from the cool colors of the old main flagship stores, which tended to be intimidating, and - as it happens - these moods not just make the items pop but also create a good instagram compatible ambiance for the social media generation.
Instead of stacking pants with pants and shirts with shirts at Jaune the merchandise is displayed as "trends", "active", and "icons". Mind you Rectange Jaune tried to lure a younger (meaning in their 30s) audience but the brand stubbornly kept being thought of as gentlemany and old - even including Hockney or Wilde in their displays and lookbook did not break the ice with a more casual trendy audience.
But this new foray with a simpler logo, new structure, display, categorization might do the trick and help expand the brand in the Arab world or even internationally. Actually, even design wise, they went more zen, more minimalistic - Scandinavian one might say - eliminating all the embellishments and going back to basics. In a different period of my life, this would not have made sense to me, but having gone through a major cleansing myself, it all falls into place - multitasking clothes which are so versatile they fit almost everywhere, simple, well done and elegant in their own repertoire.
Even a touch of pop colors has made it there, bold without being flagrant, and stylish without being obvious. What's there not to love?
Posted by Tarek Chemaly at 9:53 AM