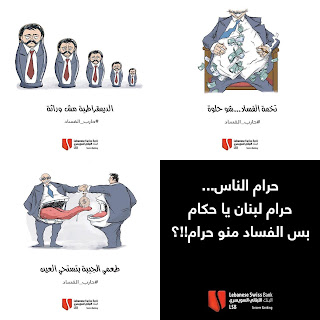 Lebanese Swiss Bank is playing it coy - as if not part of the alpha banks in Lebanon (with deposits exceeding 2 Billion Dollars).... And basically, is throwing all the usual finger-pointing at "corruption" (as a disclosure I have done work in the past for LSB). "Democracy is not hereditary" "corruption bloating, how lovely" "feed the pocket and the eye goes shy" or "we financed the state but who milked it?" is but samples of the campaign. It all ends with a black screen "pity the people.. people Lebanon you rulers... but isn't corruption a pity?"
I am not negating the campaign is good, but coming from an alpha bank which has benefited from the "financial engineering" it makes one a bit puzzled. Just to note, considering I know Tanal Sabbah the chairman of the board and how colorful he is, I know where these ads come from, but I also wonder where they stand as an instituation. I suppose this is a counter-message which takes the exoneration route out.
Posted by Tarek Chemaly at 3:05 PM