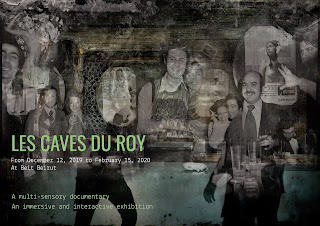 Les Caves du Roy, le nightclub of the Excelsior hotel will have its own moment in the sun soon at Beit Beirut with an exhibition worthy of the iconic status this place enjoyed, and which opened in 1955 and "officially" closed in 1982 following Raymond Daoud's birthday party (the club and hotel had already closed prior being the place where one of the "hotel battles" took place - with Noumour Al Ahrar (the Kamil Chamou militias) occupying the Excelsior).
The project is helmed by Delphine Abirached Darmency, who describes her foray/excavation as such to the L'Orient Le Jour: "The first thing I saw was the branch-infested Excelsior pool, which due to the trailing water and the passing of time, became beautiful shadows. The floors, the terrace, the restaurant, the reception and the bar will follow. Everything was burned. Some items were lying under the furniture, on the bar. Pictures, documents, registers, telephones, salt and pepper shakers, stacked candles, signs of a melted time. Even a bottle of champagne dating back to 1975. There were two ripped sofas, red carpets, a lamp."

I can speak at length about the project that Darmency is spearheading, with the contribution of Cynthia Zahar (curator - art direction and scenography), Stephane Lagoutte (curator - photography), Eliane Achkar (curator - multimedia installations); but why not take it from the source and read about it how they want the project explained and portrayed here.

As someone whose works entirely built on the past, and with many - many - exhibitions claiming to work the said past (most - to be quite honest - are lowest common denominator with no concept whatsoever) I now wait impatiently for this exhibition. Do visit their page directly here!
Posted by Tarek Chemaly at 3:14 PM