Almaza re-does its diamond competition (with a misleading slogan) 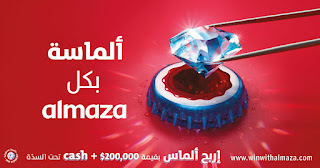 Almaza has a new diamond-winning competition (there is even a website for that!).
To begin with the competition is not new - it was done before under the slogan (chrab Almaza rba7 almaz - drink Almaza win diamonds). Almaza litteraly means diamond in Arabic. So the competition is a re-heat of a previous effort. But the thing is - why do it with a misleading slogan? The slogan says "a diamond inside every Almaza". Actually the diamond has been the symbol on the cap of the bottle and whereas we are not in the US - where a disclaimer needs to be put to avoid being sued due to misleading - it also not too smart to imply it with such a ho-hum slogan. Sure there are - with a smaller font - exapliners as to what is being won (diamonds worth 200,000 USD), but well, maybe they should have stuck to "drink Almaza win diamonds". At least there is no quid pro quo on that one!
Posted by Tarek Chemaly at 8:21 AM