RLL (Radio Liban Libre) an ad with pros and cons 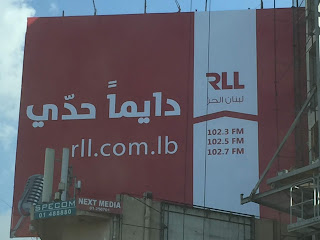 Hmmm, here's an ad for Radio Liban Libre with pros and cons.
Pros:
Same typography and colors used for the Lebanese Forces during the elections leaving little doubt as its political orientation (same trick used for the martyrs' mass I covered before).
Cons:
What kind of headline is that? "Always by my side". Hmmm - if it's about it's frequencies, it's ho-hum, if it's about something else - such as emotional comfort (that's what candies are for!). So not sure this is a substantial promise.
On the whole though, the ad speaks loud and clear to is own targeted audience.
Posted by Tarek Chemaly at 7:53 AM