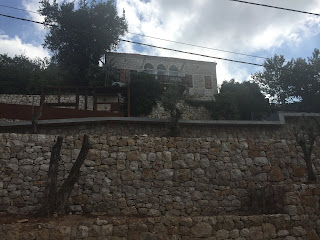 So yesterday was the opening of A.MUSE.UM - the atelier-cum-exhibiting-space-cum-architectural-maze - nestled in the former terraces beneath the architect's traditional Lebanese house. Is it a gallery? It is. Is it an atelier? It is. Is is a projection space with multimedia capabilities? It is. Look, the space is so incredibly polyvalent, with many exits and entry points, with a humongous quantity of light pouring through, adorned with Asian influences but also rooted in Lebanese traditional craftsmanship.
Karam has certainly his own style, and he has embellished the space with small take away cards with words such as him seeing a fleeing tiger in the sky in Tokyo and that "It was magic." Or musings about death giving him both his smallness and boundlessness.
I have know him since 1994 when I covered his epic (and I measure my words) T-Races BSC4791 exhibition at the Sursock Museum. A feat which I sincerely believe remains unparalleled and unequaled in terms of works exhibited in a semi public space in Lebanon.
And since this is an advertising blog one cannot but recall the wonderful SF MOMA (San Francisco Museum Of Modern Art) campaign which took the Museum as "muse":