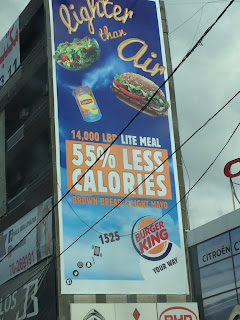 Buger King in its new installment for its "lite menu" which apparently has 55% less Calories than the usual meal, describes it as "lighter than air". This is where one needs imagination and a big stretch of it to actually believe the ad - in "common sense" I can already see the reactions: Don't be silly, it's just an ad, no one will believe these items fly and are "lighter than air" it's an euphemism.
Unfortunately for this ad to run in the US for example, it needs to be accompanied by a notifier that the ad is merely a suggestion, that it obeys the laws of gravity and physics, that it the image suggest a creative idea rather than a real situation and so on. Still, even in a Lebanese market I still feel labeling your food lighter than air is a tad pushing it too far.
Posted by Tarek Chemaly at 8:11 AM