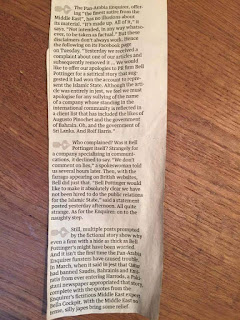 Arabian Inquirer apparently had to apologize for an article it ran which said that PR firm Bell Pottinger was representing the Islamic State. No it does not, however its roaster of clients includes: Augusto Pinochet (Chilean military ruler), the Gupta Family in South Africa (has has strong ties to Jacob Zuma), Oscar Pistorius (who basically was found guilty of killing his girlfriend), the United States Department of Defense (which commissioned the company to create fake terrorist videos for 540 Million Dollars), and the list continues. But no, they do not represent the Islamic State.
As Bette Midler said: "I have my standards. They are low, but I have them."
Posted by Tarek Chemaly at 2:13 PM